Our multi-year campaign has the end goal of $40,000. We are well on our way, thanks to your generous donations in past years:

Below are videos from advocates that appreciate Virtue Online!

“I have only a small amount. I cannot possibly make a difference.”  Do you think big donations are all that matter? Not so! The era of big donors supporting strong Christian ministry is coming to an end. When was the last time you’ve heard of a young billionaire strongly supporting an Evangelical and Catholic Biblical Christianity? We have lost the rich, my friends.

However we have, and always had, the people. How has the Early Church triumphed, persecuted and with hope of financial support from the Emperor, or anyone with wealth? It was you. Regular people, a world full of them, including you. This is the magic of crowd-funding! We do not need $100; your $10 will make all the difference.

“I Can’t Change The System”

This is the perfect opportunity to change the system. Our world is filled with fake news. The Episcopal Church has lavishly funded magazines and constant appearances on TV. Can we combat them and spread news in a less luxurious manner?  There is only one way: like for like. Magazine for magazine. News outlet for news outlet. You need someone to speak for you, when the misguided news agencies attempt to control the airwaves. This is our role. With VOL, you can make a difference. 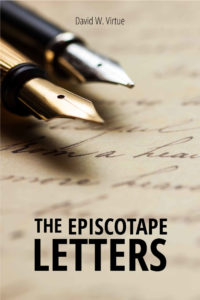 I’ve written my first book in years: The Episcotape Letters. It humorously pokes fun at the Episcopal Church of the last thirty years, in the vein of C.S. Lewis’ classic, The Screwtape Letters. If a perfect intelligence could direct the pathway for the ruin of a noble denomination with a rich heritage, it would happen precisely as in the case of the Episcopal Church. My book discusses how the otherworldly plans might have been hatched!

Stand by VirtueOnline, as it will always stand by you. I have written for free in support of orthodoxy during these last thirty five years so that we can all  have a brighter future. Together we can make an amazing impact in 2020!